Contributor to Our Problems: Hospital Birth 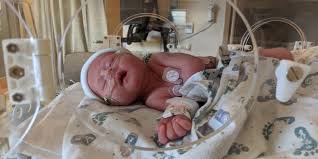 A typical American birth is transformed from a natural event to a medical event. The mother gives up control of the birth to a doctor. Routine experiences for the baby can include the pain, distress, and possible physical injury from amplified contractions connected with induced labor, the increased use of extraction devices following the use of epidural anesthesia, and premature clamping and cutting of the umbilical cord. After the birth, there are injections of Vitamin K and hepatitis vaccine, burning and blurring eye medication, heel-lancing for blood samples, and being straightened out for measurements. The effects of all these routine experiences on the infant are ignored.

The separation of newborn babies from their mothers after birth, standard policy in about half of American hospitals, can result in psychological trauma and long-lasting neurobiological changes. Newborn infants have an urgent need to held by the mother. The separation is more prolonged for those infants in neonatal intensive care units. Being placed in these units involves considerable invasive pain for infants. Designers of these units did not consider that babies could feel and remember pain. If they survive, many infants are left with long-term emotional distress.

No study shows that birth in a hospital is safer than birth outside of a hospital with competent support. With #1 being the lowest rate, the United States ranks 56th in infant mortality and 47th in maternal mortality. More technology and drugs do not make birth safer. Instead, they make it more likely that there will be unnecessary interventions with the natural birth process resulting in complications.

A number of studies suggest a relationship between birth complications and violent behavior. In a study that received national attention, investigators followed over 4,000 male infants to age eighteen. They found that those infants who had experienced both birth complications and disrupted bonding were most likely to engage in violence when they grew up. This conclusion was supported by the National Research Council study on violence. In another study, fifteen of the sixteen most violent criminals were found to have had an difficult birth, and the sixteenth had an epileptic mother.

Another research report found that certain types of birth complications were associated with a preferred method of suicide, violence to the self. For example, suicides involving asphyxiation were closely associated with breathing difficulties at birth. Suicides by violent mechanical means were associated with mechanical birth trauma such as forceps delivery. Also, drug addiction was associated with drugs having been administered to mothers during labor. This generally unrecognized information suggests that violent tendencies may be influenced by birth-related events.

The American cesarean birth rate was 4.5% in 1965. It is now about one out of three hospital births and the highest in the Western world. In addition to being a major intervention in the natural birth process, cesareans involve more separation between mother and infant at birth. They also increase the chances of the infant being assigned to the neonatal intensive care unit, and the risk of disrupted bonding.

Painful experiences, trauma, drugs, shock, and separation of mother and infant make a difference. These cultural birth practices generally ignore the child’s needs, what is natural, what is pleasurable, and what supports bonding. In 1975 obstetrician Frederick Leboyer published a book called Birth Without Violence. In the U.S. birth often is still violent, and so are we.